My husband and I spent Memorial Day weekend in Manhattan.  I know that may sound glamorous to some people — trips to museums, shopping in trendy Soho boutiques, eating delectable delicacies at the finest restaurants, going to the hottest Broadway shows, not to mention getting into some serious people watching in one of the most vibrant cities in the world.  However, even though I’m a true New-York-ophile, I barely ventured outside the small two-bedroom apartment in Chelsea where my precious 10-month-old grandson Ezra lives with his parents, my son Avi and his wife Anne.  I’d committed to taking care of Ezra so they could spend the weekend celebrating their fifth wedding anniversary in style.  While my husband and I stayed at their apartment, they spent two nights all by themselves in a charming Soho hotel, went out for romantic dinners, and were enchanted by a Pulitzer-prize winning play.  They returned home each day to squeeze in some family time with Ezra and then scurried out the door again a few hours later, ready for another adventure.  Each morning, my husband slung his camera over his shoulder and set off to explore, giving me a quick kiss goodbye.  And then, when the door closed behind him, my adventure began.  As soon as Ezra woke up from his morning nap, I’d pluck him from his crib, change his diaper, and then take him into the living room.  I put him on the floor, pulled out a couple of toys and watched as he began to explore.  He reached with chubby little hands for each toy, deftly using his thumb and forefinger to open and close the doors on his chunky cars and trucks, picking up blocks, shapes, soft toys, stacking cups — everything in his path.  Enchanted with his new skill at taking steps, he teetered back and forth across the room, picking himself up immediately when he plopped down and then starting all over again.  I sat on the couch, watching him play, smiling encouragement, scooping him up every now and then to give him a hug, singing along with the music flowing from my Ipad.  The supervising, loving and encouraging came from me but the thinking, learning, doing, being and becoming were all his.  I marveled at his ability to play for hours, turning each object over and over as he studied it with his wide-eyed gaze, often chortling with glee and repeating his favorite syllable, “da-da-da.”  He was enraptured by his board books, which I placed on the floor one at a time.  It was astonishing to watch him sit and gently turn the pages, then suddenly stand up and fling the book to the floor, only to scoot over and pick it up again.  I sat and I watched and I marveled, as I’m sure I did when each of my two now-grown sons were at this stage.  But it was different, this watching and marveling.  It was different because now I’m the grandmom — not the mom — and somehow there’s a poignancy to that I can’t even begin to put into words, or at least not yet.  I think the poignancy stems from the feeling I have now that time isn’t endless anymore, the way it seemed to be when I was a young mom in my 20s and 30s.  I have this feeling of needing to soak it all up, absorb it, embed it in my heart, so that’s what I do.  I sit there like a fanatical sun-bather, soaking up the wonder of this extraordinary little being who is a part of me and yet so much his own  person and so much his parents’ child.  And my children think they were the ones who received a gift last weekend….. 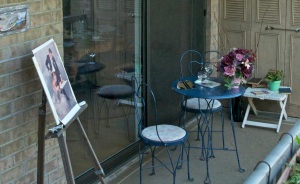 Although there are some people who love living on the edge, I’m definitely not one of them!  However, my husband Steve — he’s my second husband and we’ve been married for 9 years — has his own philosophy for living each day: “let’s-wait-’til-the-last-minute, never-plan-if-we-don’t-have-to, wait to see-what-will-happen-if…”  He loves nothing more than catching me off guard with his sometimes wacky, often breathtaking/wondrous but at times aggravatingly annoying pranks/ideas and unpredictable antics.  Yesterday he hit the jackpot on the wondrous spectrum.  I was having an off day and feeling kind of tired and blue so I took a nap in the late afternoon.  When I woke up, he kept saying things like, “Oh, to be in Paris,” “We’ll be in Paris soon,” “There’s no place like Paris.”  Since he knows that usually any mention of Paris perks me up considerably — we’ve been there only once but I spent my life dreaming about going and have been in love with the French language since I was in elementary school — I really didn’t pay much attention.  Then I walked into our living room, glanced outside — and voila!  Steve’s recent thrift shop purchase — a sweetly retro table and chair set — had become the centerpiece of a charming Parisian scene, right on our patio!  He’d scattered some of my French books around and set a bouquet at a jaunty angle and two wine glasses on the small round  table, awaiting a romantic encounter or celebration.  The piece de resistance — the gorgeous wedding portrait of my son Jon and his wife Kristin (a Steve Reese original) was lovingly displayed on an easel.  Sometimes living on the edge can bring real magic into your life…..